But since we’re already aware of ROG’s expertise in gaming, we decided to take another route and see how this device fares in the life of a content creator. With work that requires almost as much power as gaming, I set out to find if this dual-screen laptop would, in any way, make a difference in my workflow.

The ROG Zephyrus Duo 15 SE comes in an off-black matte case with a glossy ROG emblem on the corner. The dot-matrix display that we saw on the ROG Zephyrus G14 is no longer here but there is still a subtle perforated design on the cover. 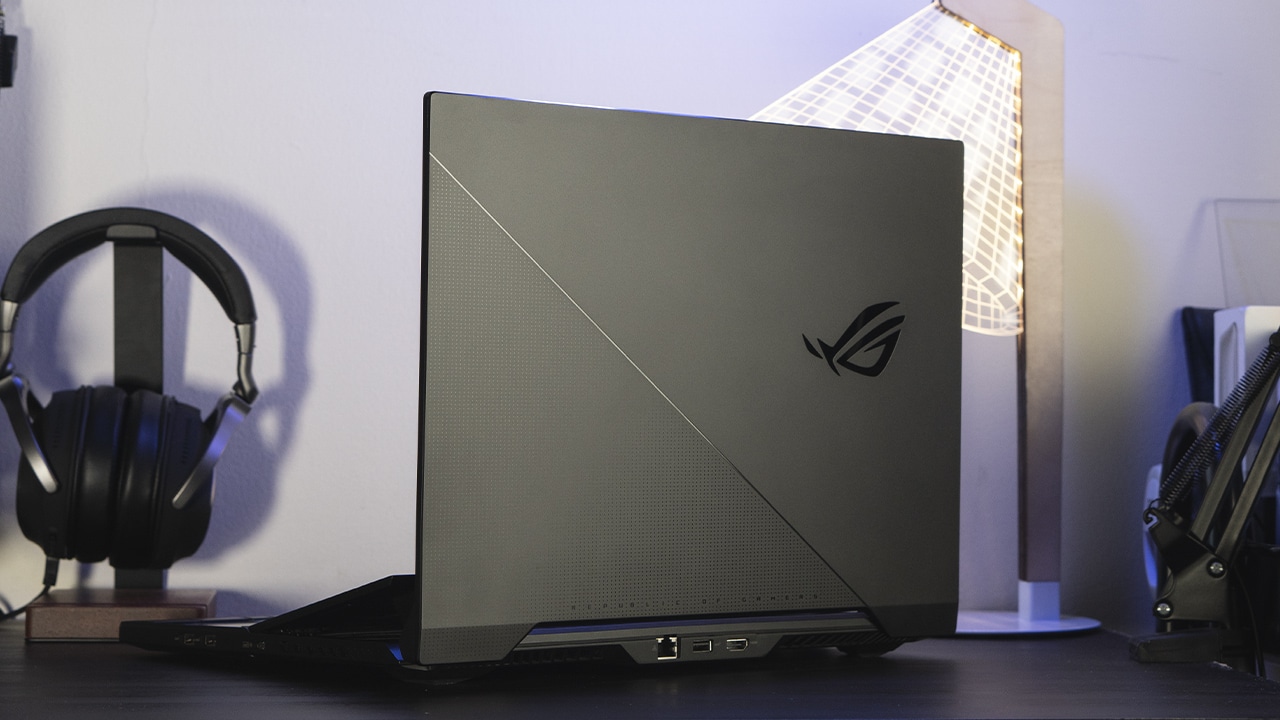 Open the device and you’re greeted with the pride of the Zephyrus Duo 15 SE — its dual-screen setup. The second screen lifts and tilts up to provide a good viewing angle while dual speakers with Smart Amp technology are found just below the main display. Under it, you’ll see the device’s fans that help increase airflow which keeps the machine cool. 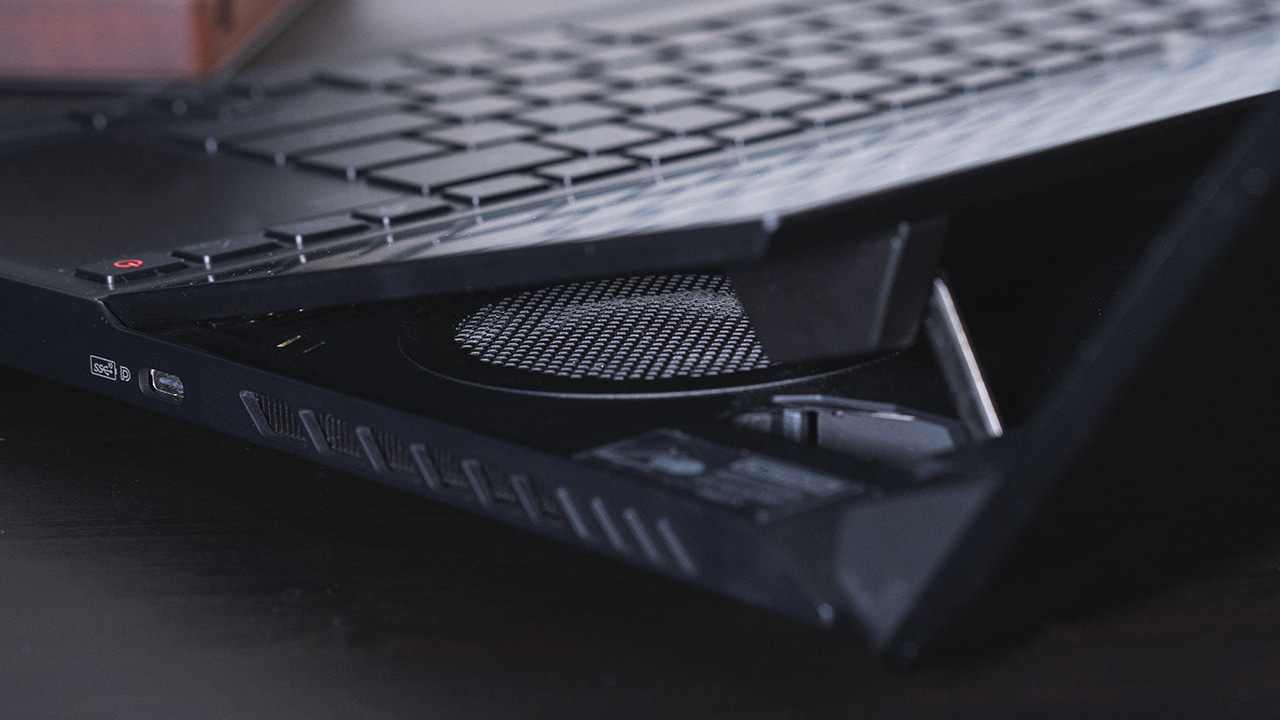 Ports are further down the side of the body than normal with the microSD card reader, AC port, and headphone jack on the left. Two USB-A ports live on the right as well as one USB Type-C port that can also be used to connect external displays. You can find an additional USB-A port at the back as well as the HDMI and Ethernet port. 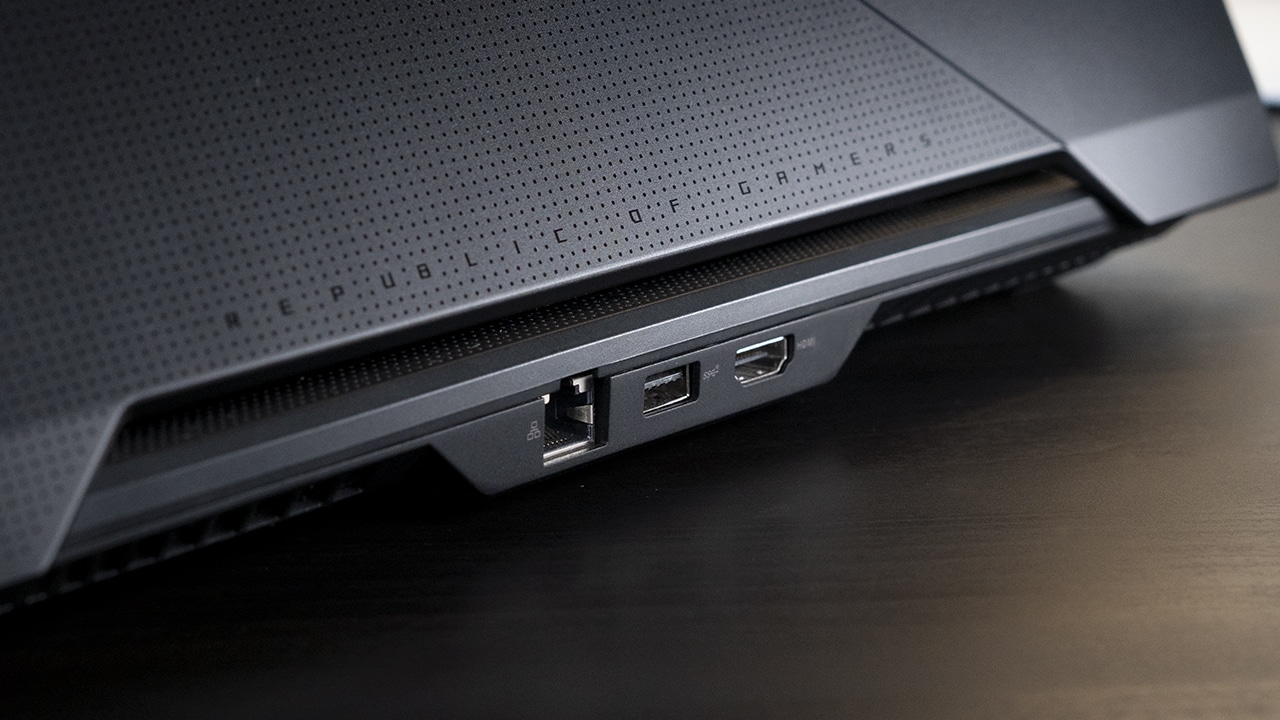 While the overall design of the device is impressive, you’ll have to endure a keyboard and trackpad that just feels a little too squished together. Understandably though, this design decision was made to better accommodate the second screen. 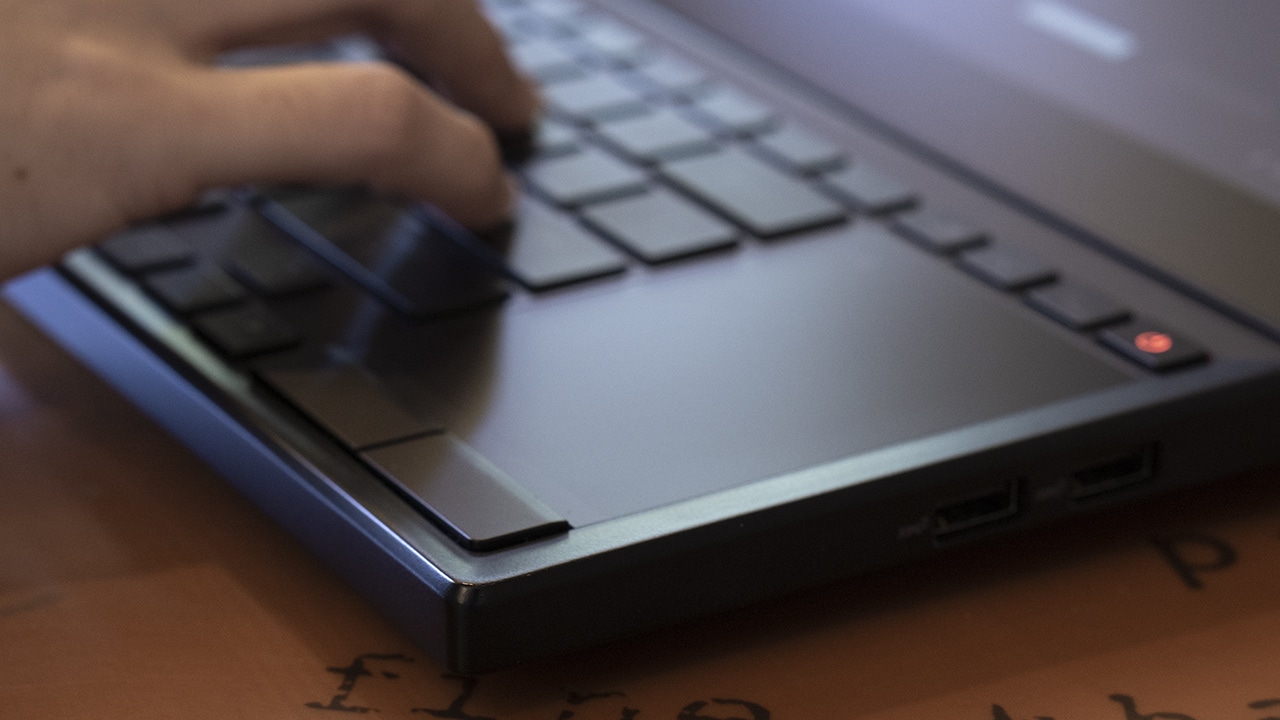 The trackpad placement, in particular, took quite a while to get used to since my arm would automatically go to the center of the device. I also found the size too small and would often accidentally press the arrow buttons instead of the trackpad.

I gave myself more time with it and eventually, both the keyboard and trackpad became less awkward to use (but still a little awkward at times). I still found the trackpad small though so it’s best to plug in a mouse when working long hours. 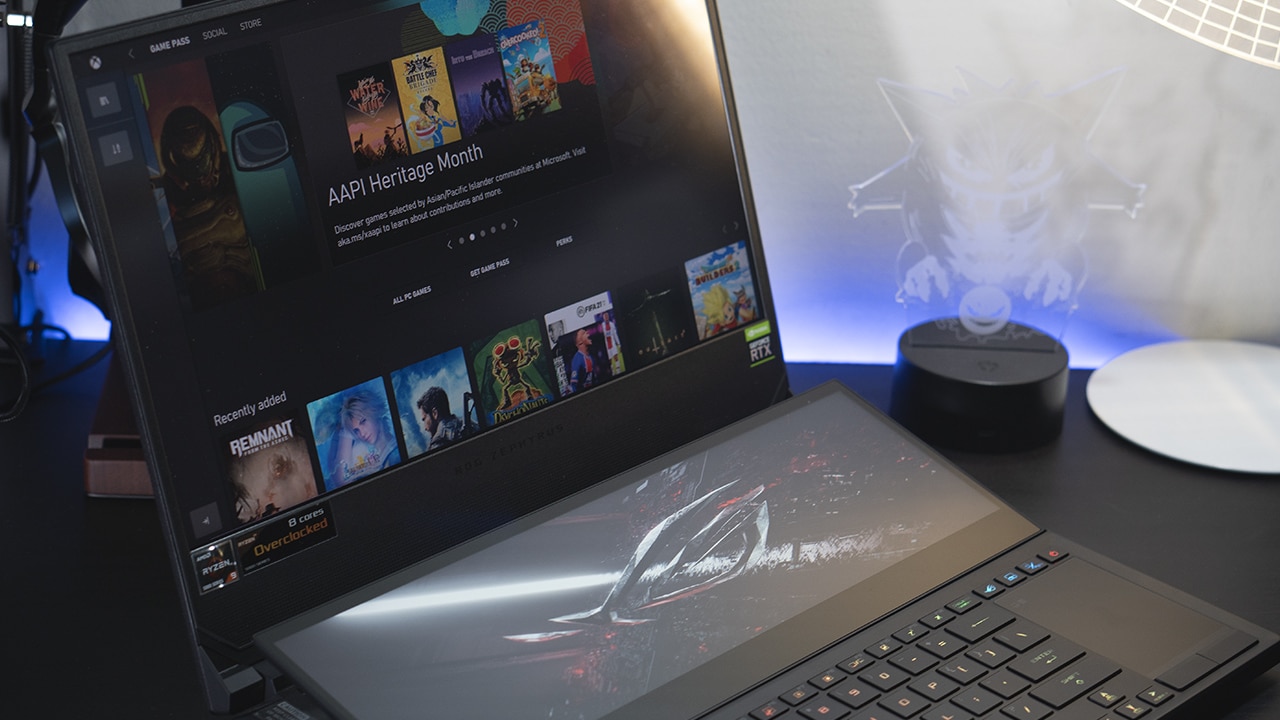 As a content creator, I tend to look for displays that can not only handle high resolutions but also give the best representation of color possible. Having 100% Adobe color on the 15-inch screen and being Pantone-validated means that this laptop can do just that. 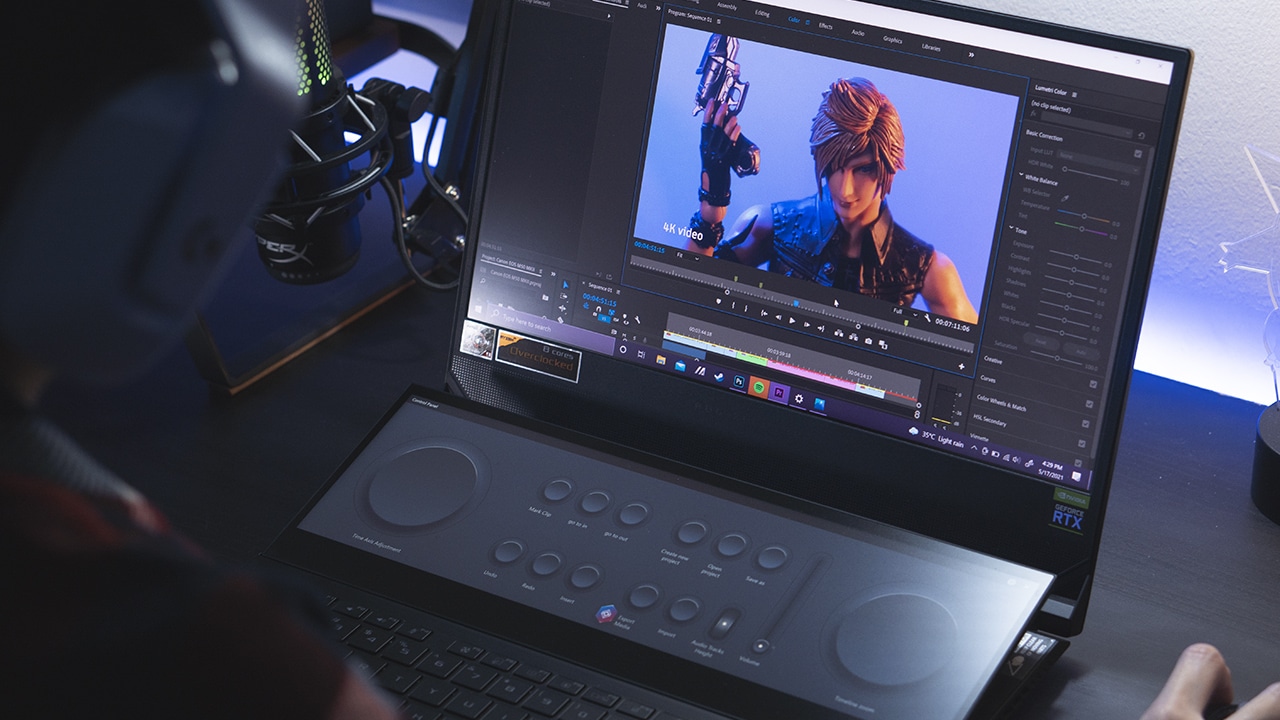 The ability to reproduce vivid colors while remaining faithful became very useful when I was editing photos or color grading videos. And whether I was working, watching a movie, or gaming, it was often an immersive experience because of the display.

You’re not getting the highest refresh rates available, though, because ROG switched that out for 4K screen. But for a content creator/casual gamer like myself, it’s a pretty good compromise that still makes both tasks look good. 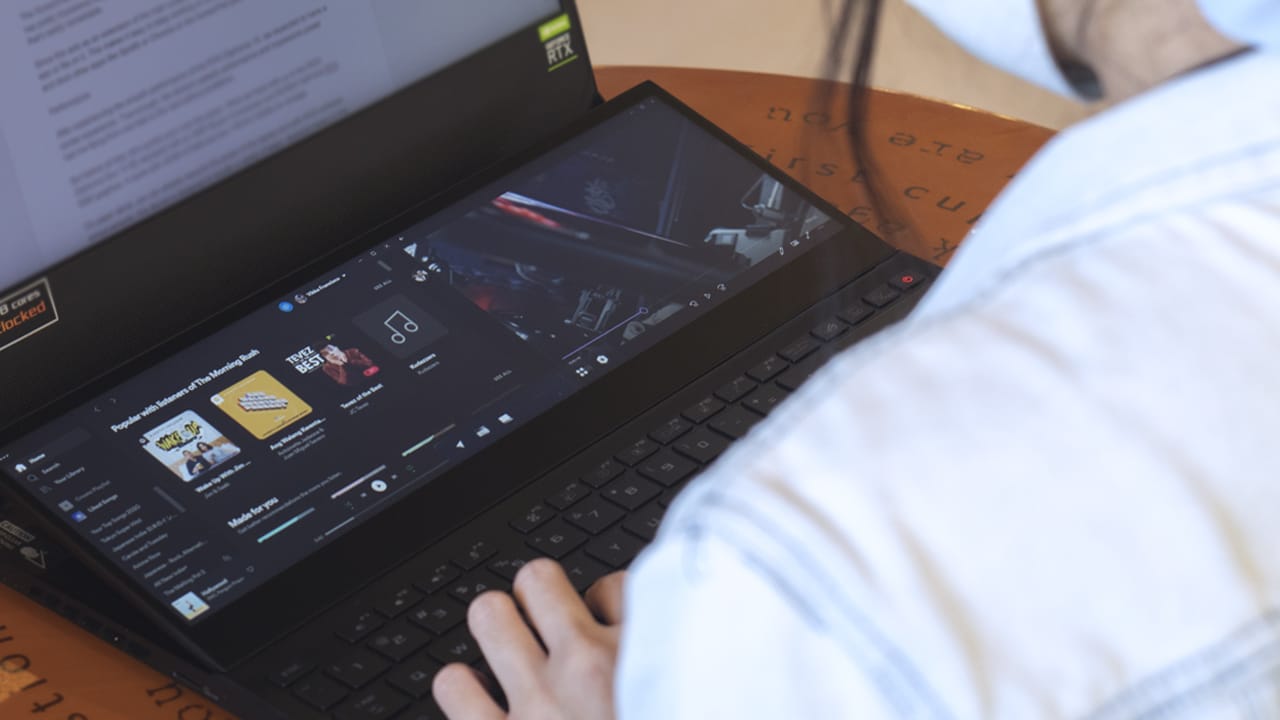 The ScreenPad Plus, on the other hand, isn’t as customizable as the main display but still has pretty impressive image quality. Text can get tiny if you use the highest resolution but you can opt for a lower one. And since this acts as an extension of the main screen, you can drag and drop practically any app or file to it. 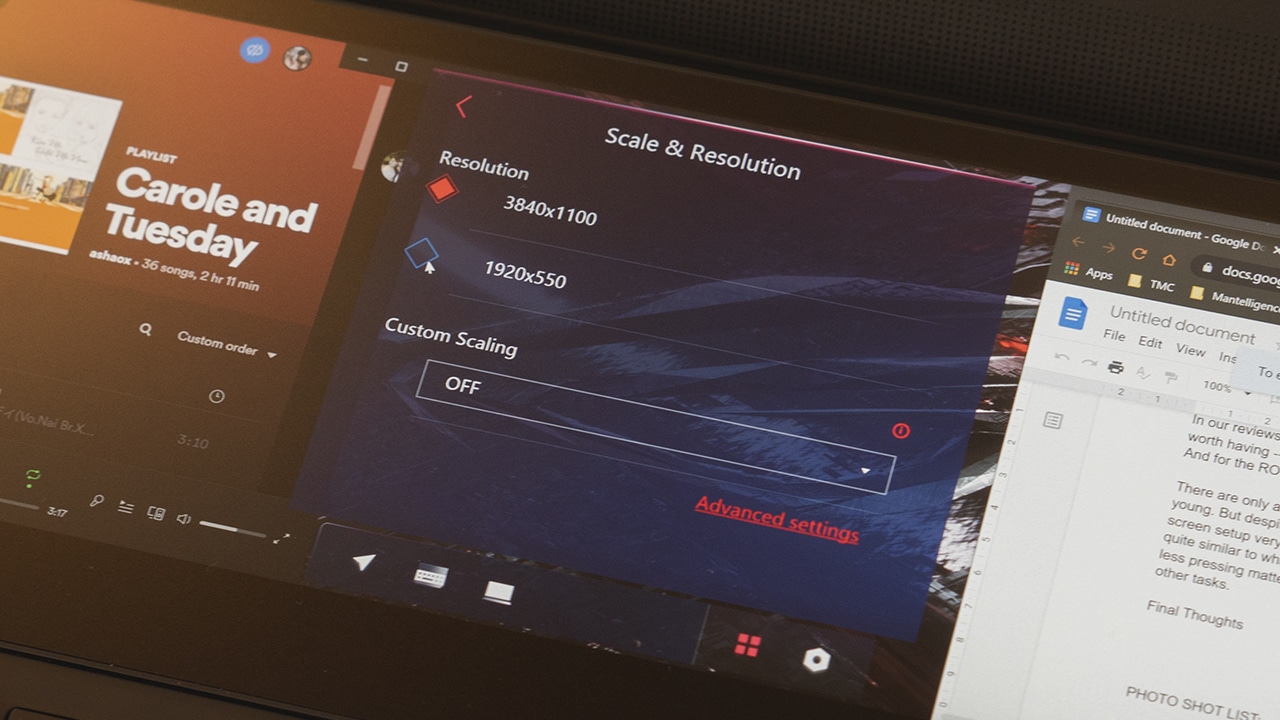 This makes it easy to keep working on a full screen on your main display and dock other apps like Spotify or Chrome on the ScreenPad Plus. There are also handy and exclusive ScreenPad Plus features like Quick Key for commonly used commands, Task Groups for organization, handwritten note-taker, and more.

After experiencing the smooth performance of the Zephyrus G14, we expected to have a similar experience. True enough, the laptop had me flying from one task to the next. But before we get more into that, let’s quickly pour over the specs. 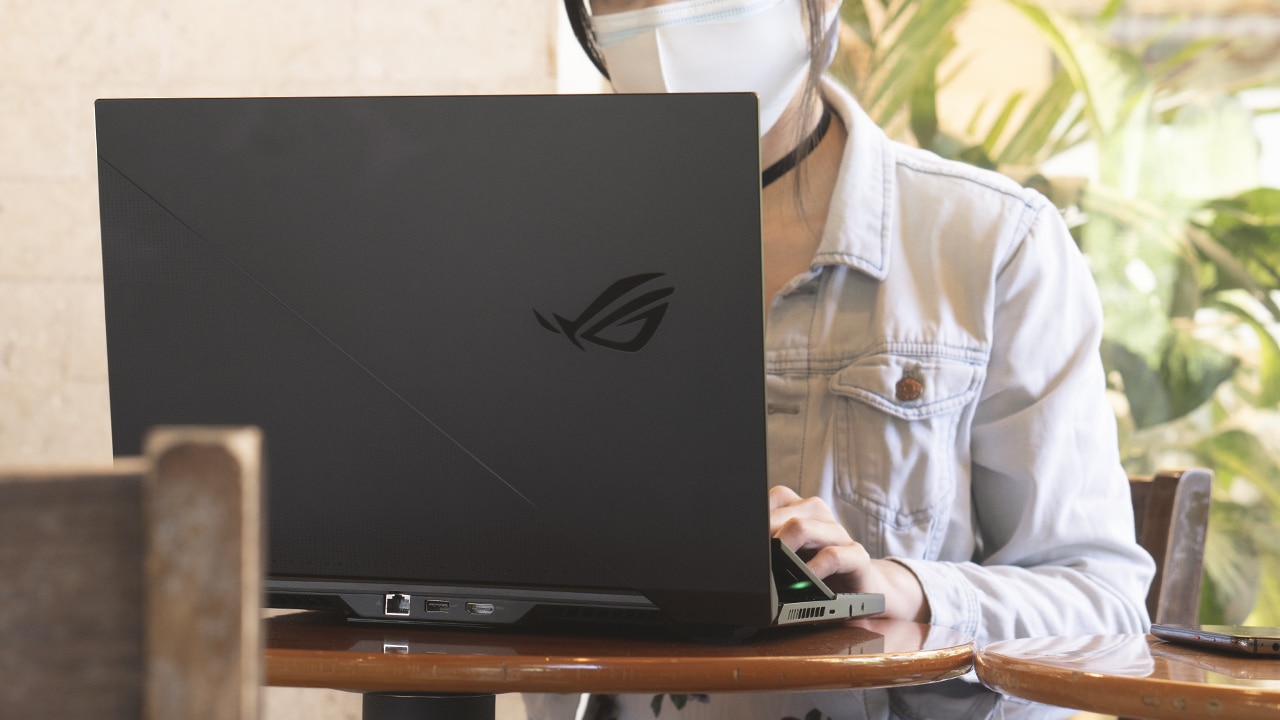 What we have with us is the ROG Zephyrus Duo 15 SE equipped with an AMD Ryzen 9 processor and NVIDIA GeForce RTX 3080 graphics. It came with 32GB of RAM and two 1TB M.2 NVMe SSDs for storage. On paper alone, you can already assume the power of this laptop and with added ROG software enhancements, it’s able to handle a variety of tasks, resource-heavy or not, with ease. 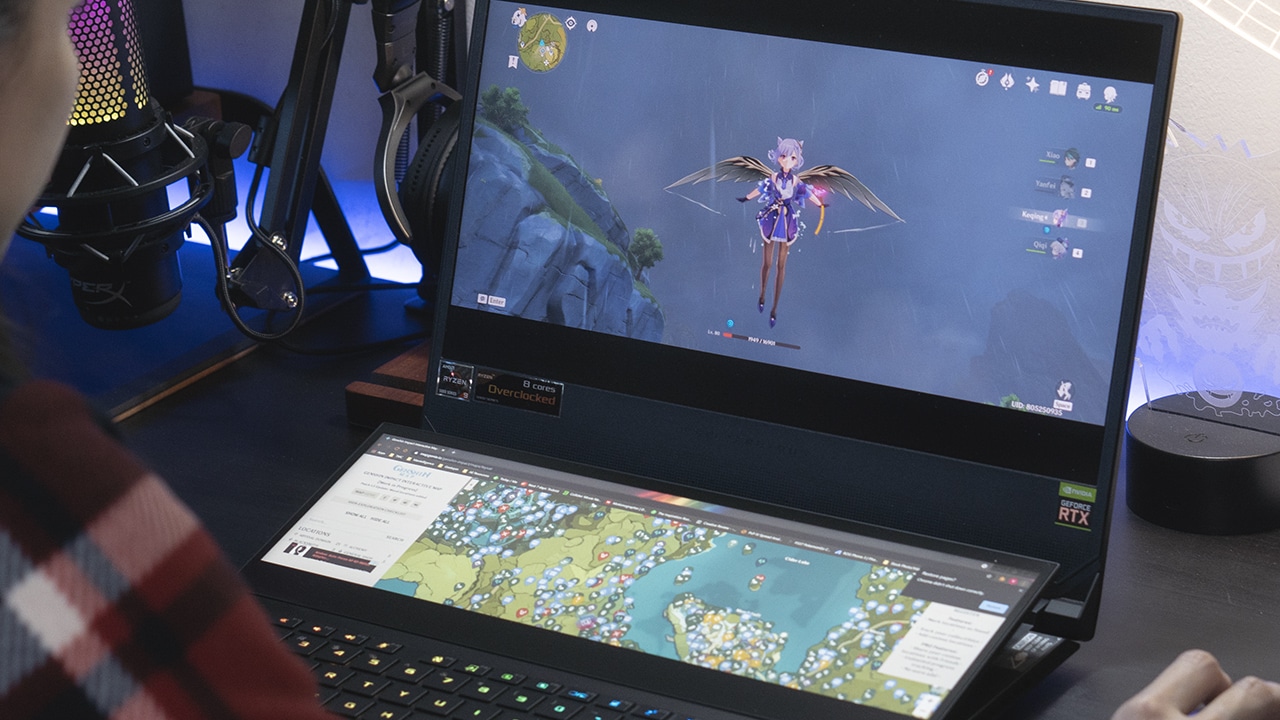 Equipped with a Ryzen processor and RTX 30-series graphics, you should have no problems running all kinds of high-caliber games on this device. I played Genshin Impact on it a lot and I’m not at all surprised at how smooth my gaming sessions were.

Even with maxed-out graphics settings, the game remained responsive even through hours of gameplay. Co-op sessions loaded fast and performance was consistent all throughout as well. What I felt lacking, though, was loudness from its speakers. It’s a shame too since the Dolby Atmos speakers sounded really impressive. 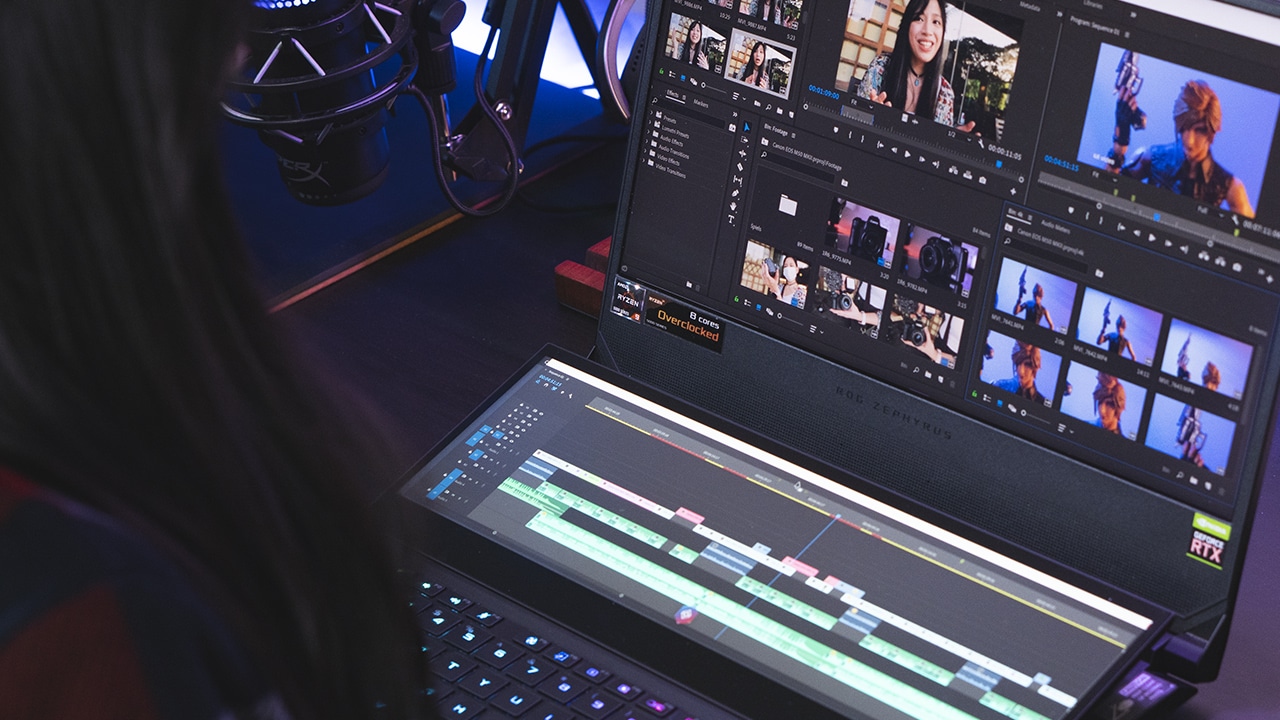 More than gaming, most of my time with this device was for work. This largely involved a lot of photo and video editing alongside the usual daily tasks and social media breaks. This powerhouse of a laptop was able to tackle up to 4K footage with ease even with effects and color grading stacked.

Video editors would also love to know that rendering was fast and painless. 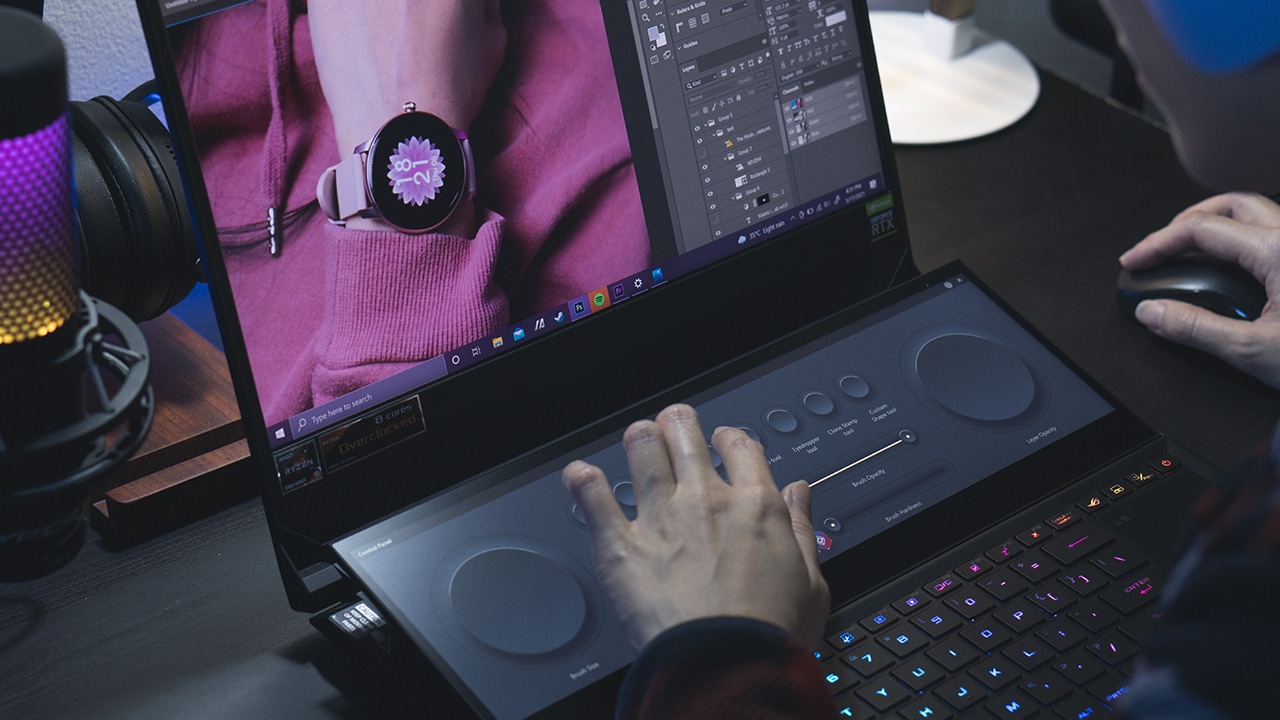 I tested the laptop’s ability in handling a large number of layers in both Photoshop and After Effects. There were no noticeable drops in performance and processing resource-heavy effects like noise reduction or motion tracking was a walk in the park. Pairing this seamless performance with the color-accurate screen makes for an ideal setup for all kinds of content creators.

One of the things that keep me from editing purely on a laptop is the limited screen space. But this is where the ScreenPad Plus and I became best friends.

At first, I was a little skeptical about the placement of the second screen as I’ve never tried anything like it before. But ROG must have done their research because it took little to no time for me to adjust to using both screens at the same time.

I instinctively was able to utilize the second screen since it simply acts as an extension of the main screen and is also just within my line of sight. 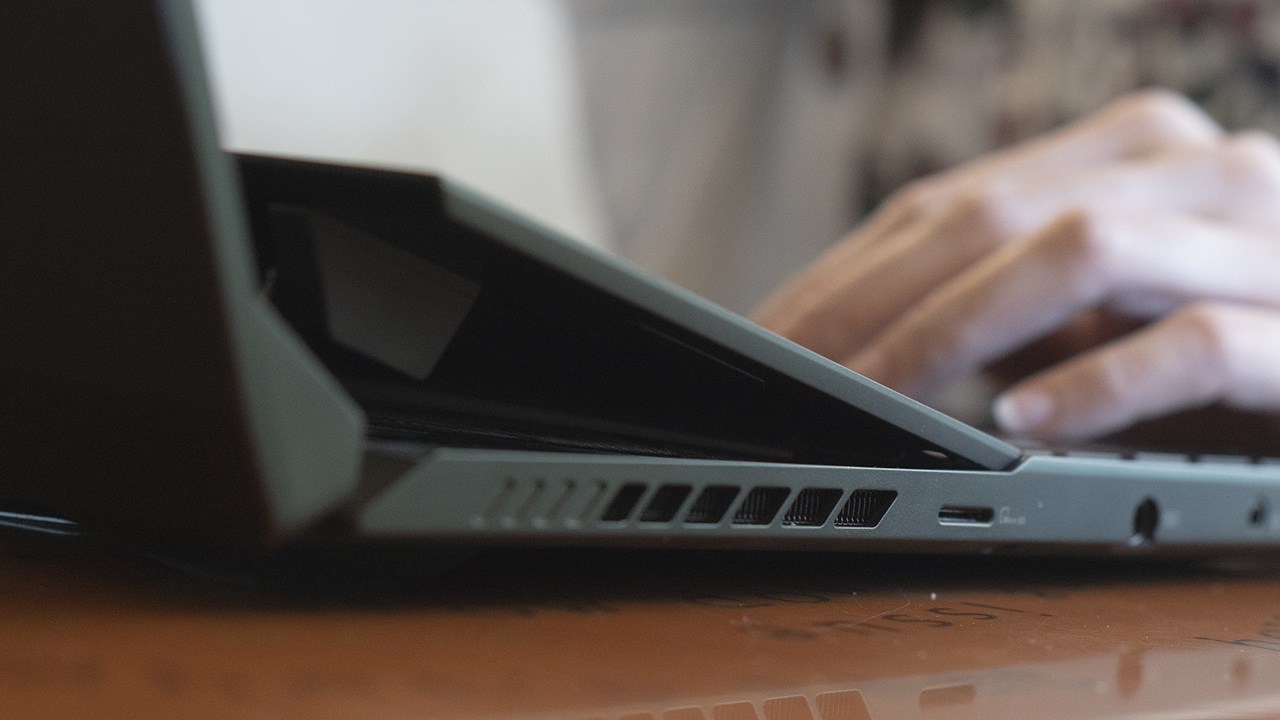 Adobe Photoshop, for example, will have a control board with tools to adjust brush size, smoothing, and even access Photoshop functions such as lasso, clone, and custom shapes. Adobe After Effects, on the other hand, will have controls for keyframe easing, camera and 3D controls, and more. 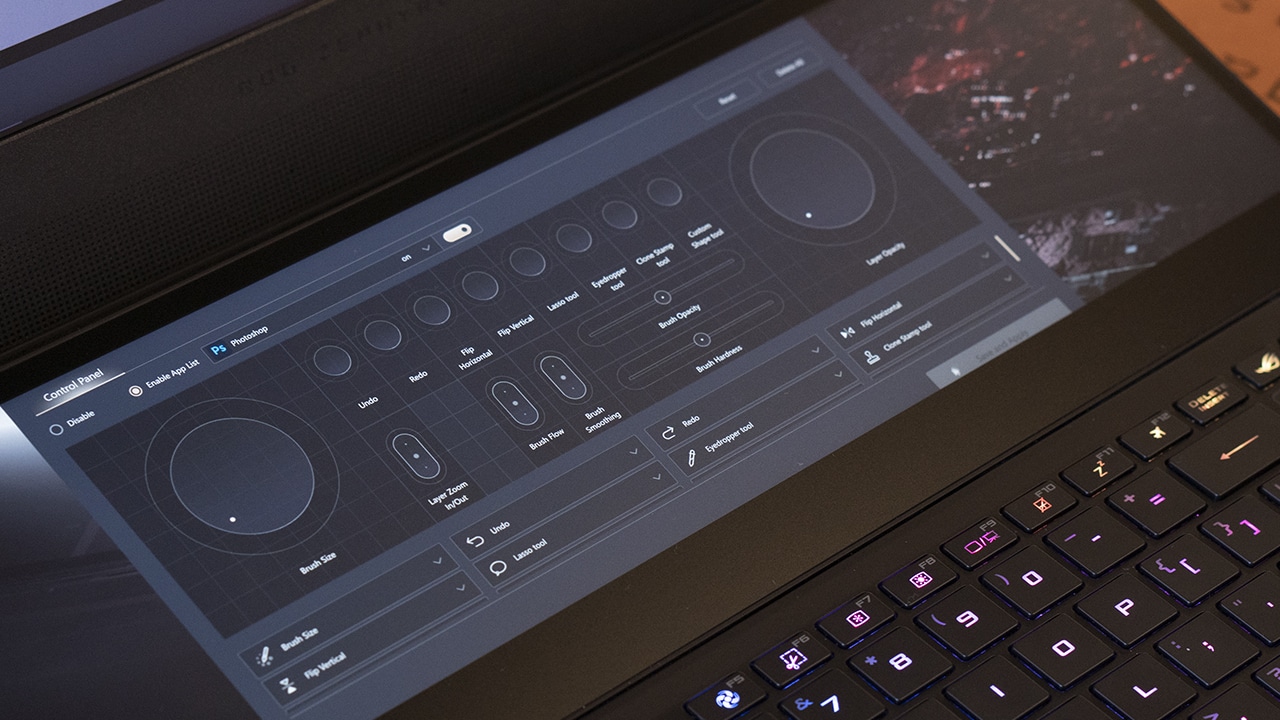 It was in using the ScreenPad Plus as a touch control board that I encountered a bit of struggle. I’ve been using the typical mouse/pen/keyboard setup for years now and it had to be a conscious decision for me to use the touch screen instead of keyboard shortcuts. 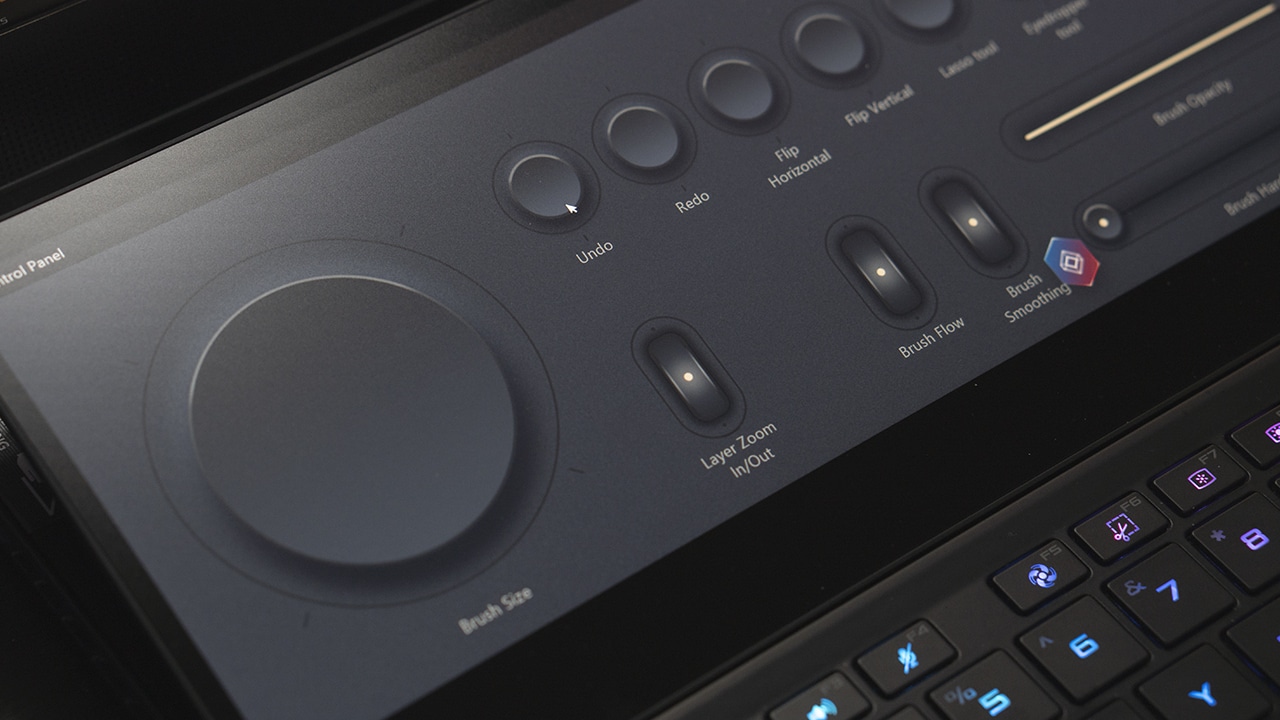 Interestingly, what I ended up doing, for the most part, was to use my mouse with the control panel instead of just using it as a touch screen. Once I got used to that, having a set of commonly used tools, quite literally, under my nose became a real convenience. 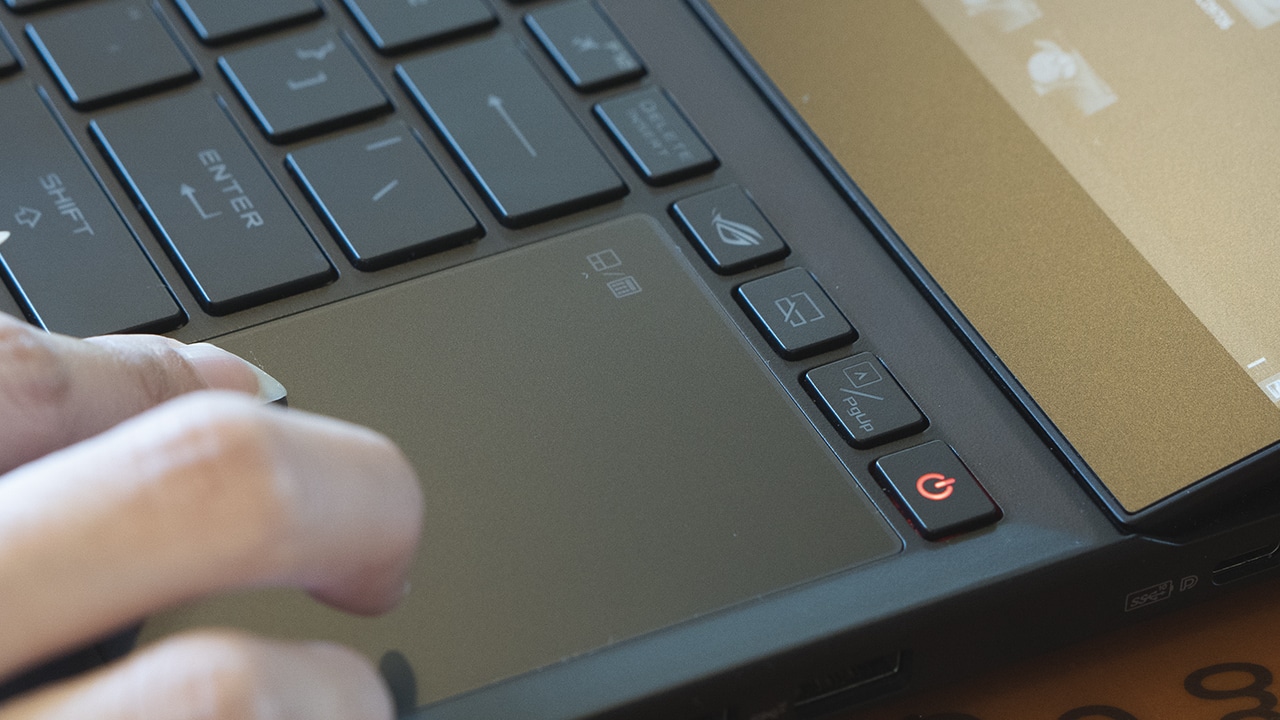 I’m not sure if this is just a unique issue for our model, but I just think it’s worth mentioning.

Overall, the real value of the ScreenPad Plus for me really is the extra space. In editing, for example, I can set my footage up on the main screen and keep my timeline down on the second screen. It helped speed up my workflow since I didn’t have to waste time going through different tabs and folders when looking for clips. 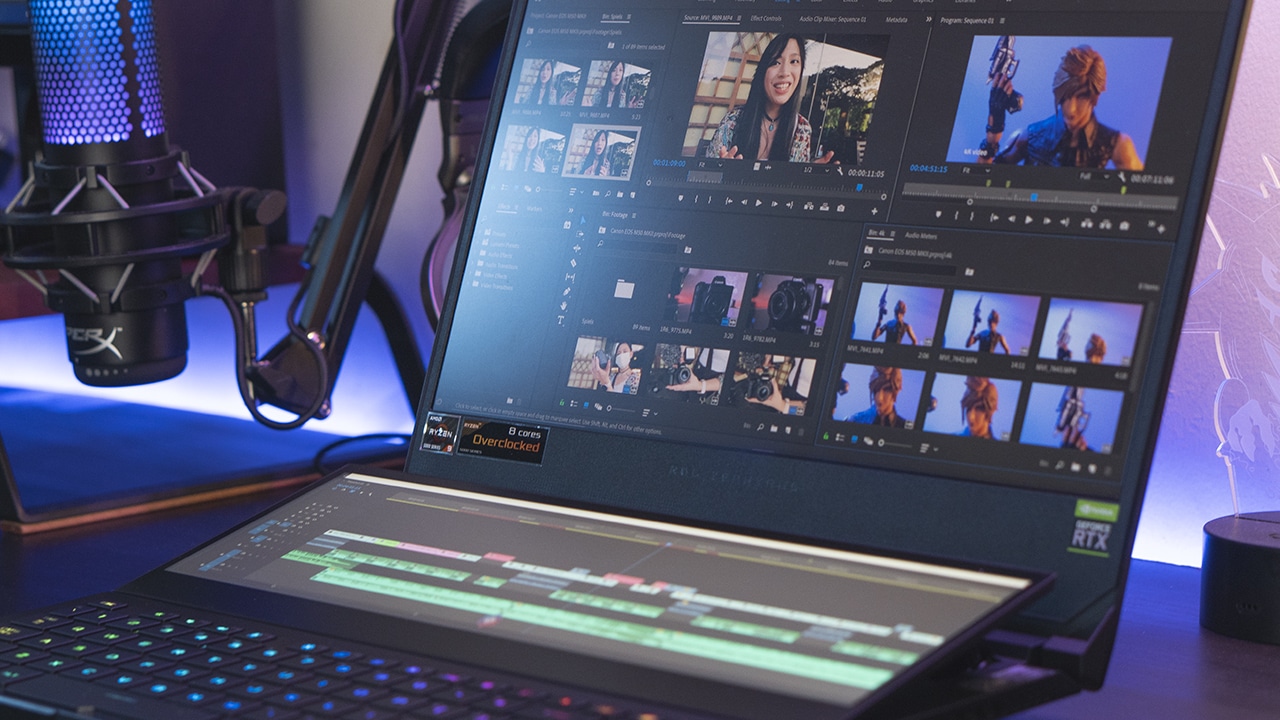 The ScreenPad Plus isn’t perfect and has some things to work on but I would still welcome it because of how it helped me become more productive and more organized, especially when multi-tasking. It’s definitely something I’m going to miss when I go back to my single-screen laptop.

There’s a lot of power being used on this device and being a gaming laptop as well, you won’t get extended battery life like on non-gaming laptops like the ASUS ZenBook 13 OLED. Still, its 90Wh battery was able to churn out a little over 4 hours before I needed to plug it in. And considering it’s powering a whole other screen, this is pretty reasonable. 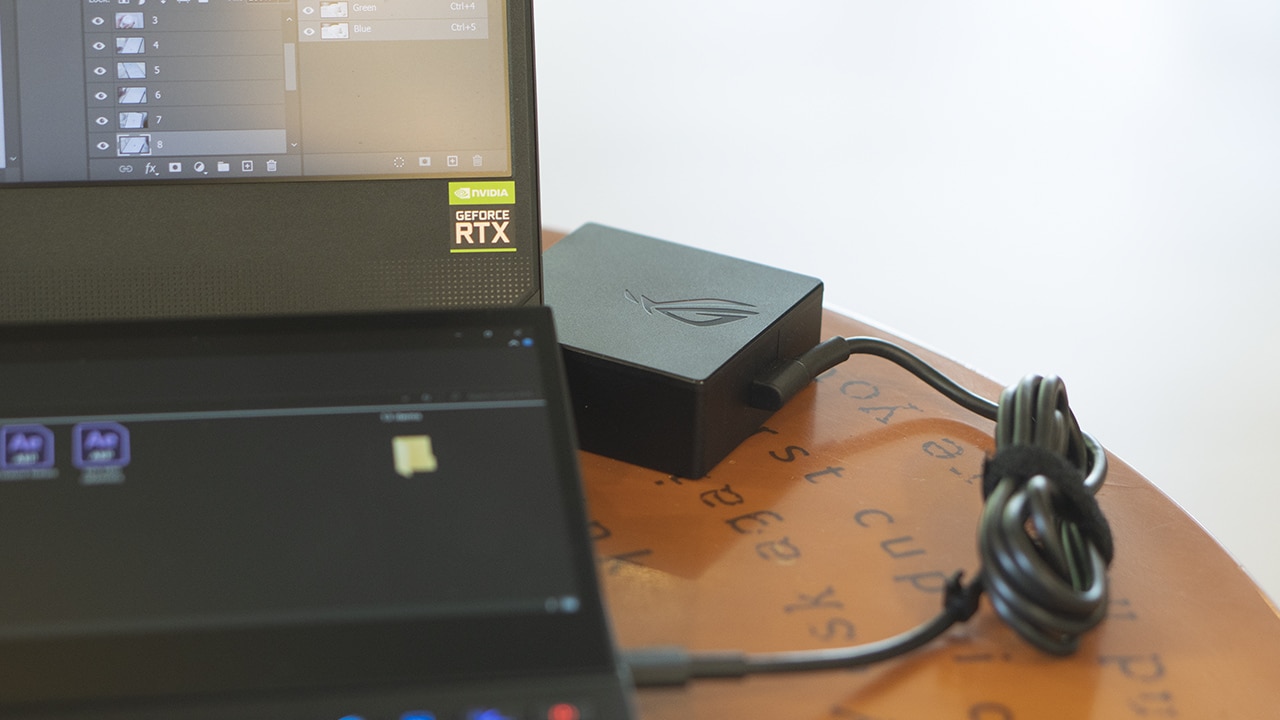 The power brick is pretty big and heavy and isn’t the easiest to bring around. Thankfully, the device does come with another, more portable USB Type-C charger for when you have a busy day ahead out of the house.

In our reviews, The Modern Creatures aims to find special features in a device that makes it worth having — something that gives it an edge over its competitors. Its Creature Feature!

All that extra space was just enough for me to noticeably improve and speed up my workflow. I even enjoyed the ScreenPad Plus for less pressing matters like docking my Spotify app or having Netflix on while I’m busy doing other tasks. 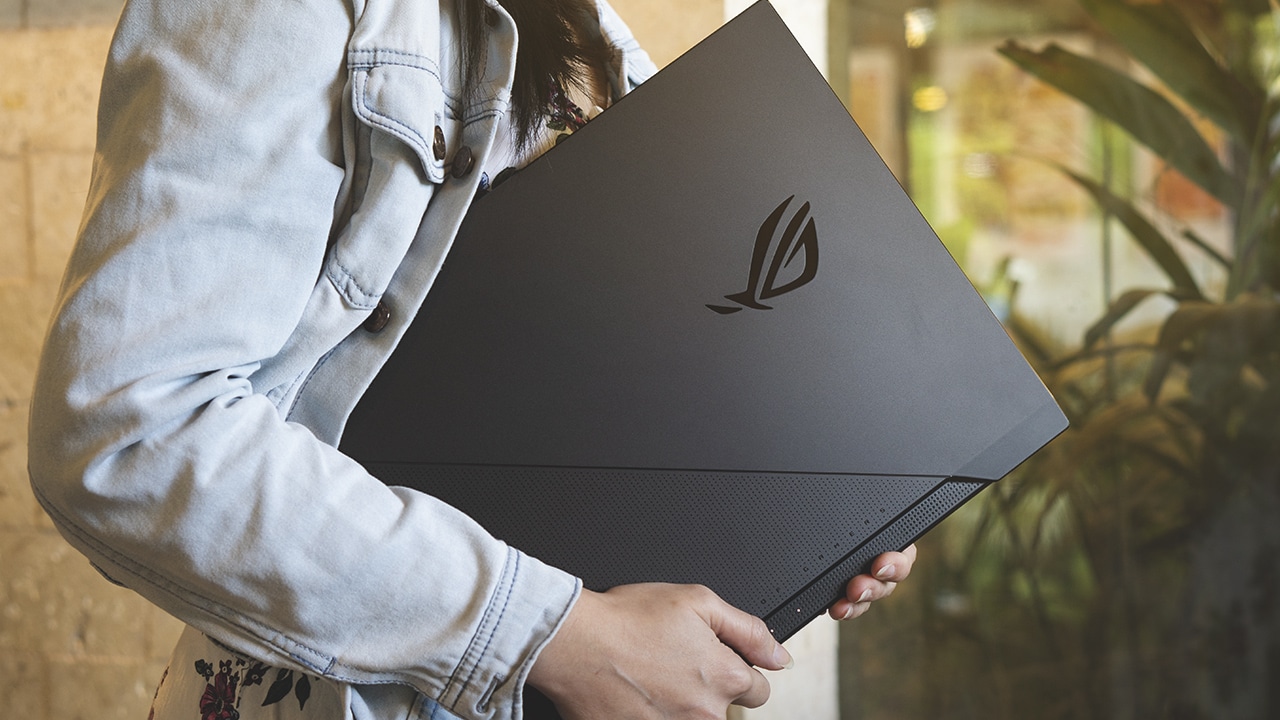 I’ll say it again, the ROG Zephyrus Duo 15 SE is a beast of a device. It’s got powerful internals, a beautiful main screen, and an innovative second screen — things a content creator would appreciate.

Is it worth the investment? If you’re someone who sees the value of a second screen as we do then we’d like to think so. So if money isn’t a problem and you want a powerful, dual-screen laptop, the ROG Zephyrus Duo 15 SE should be on your radar. 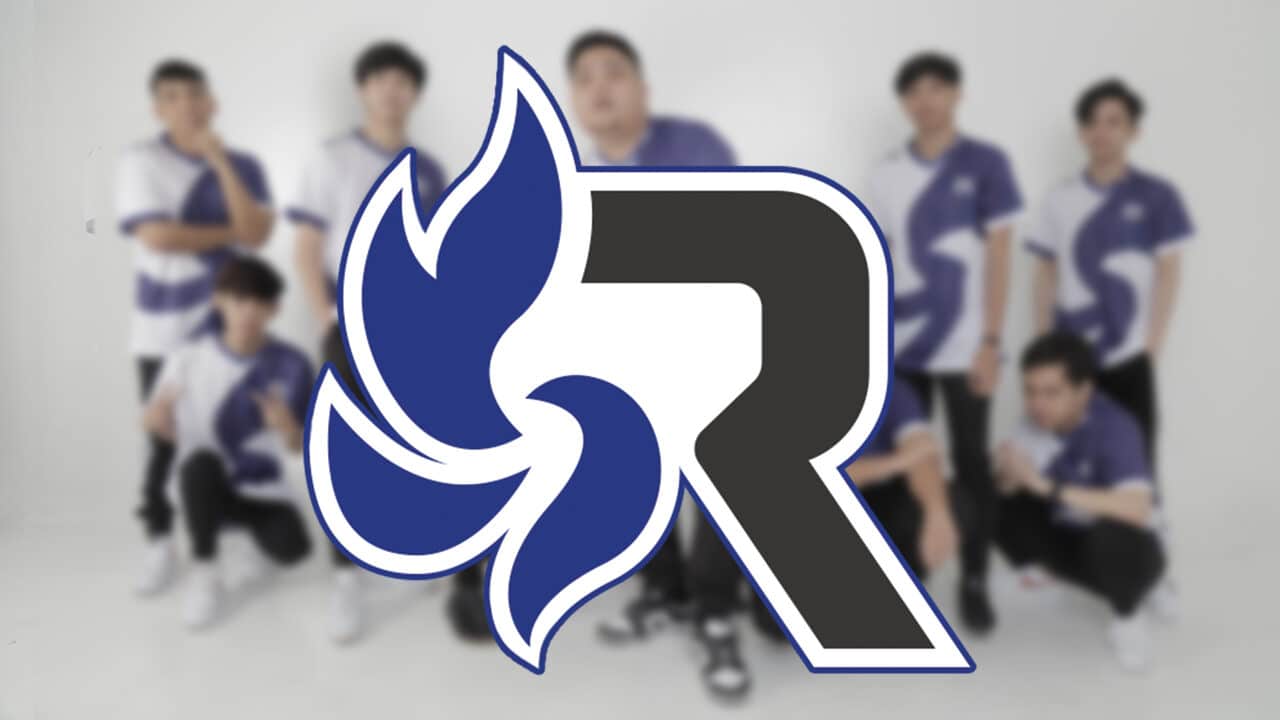 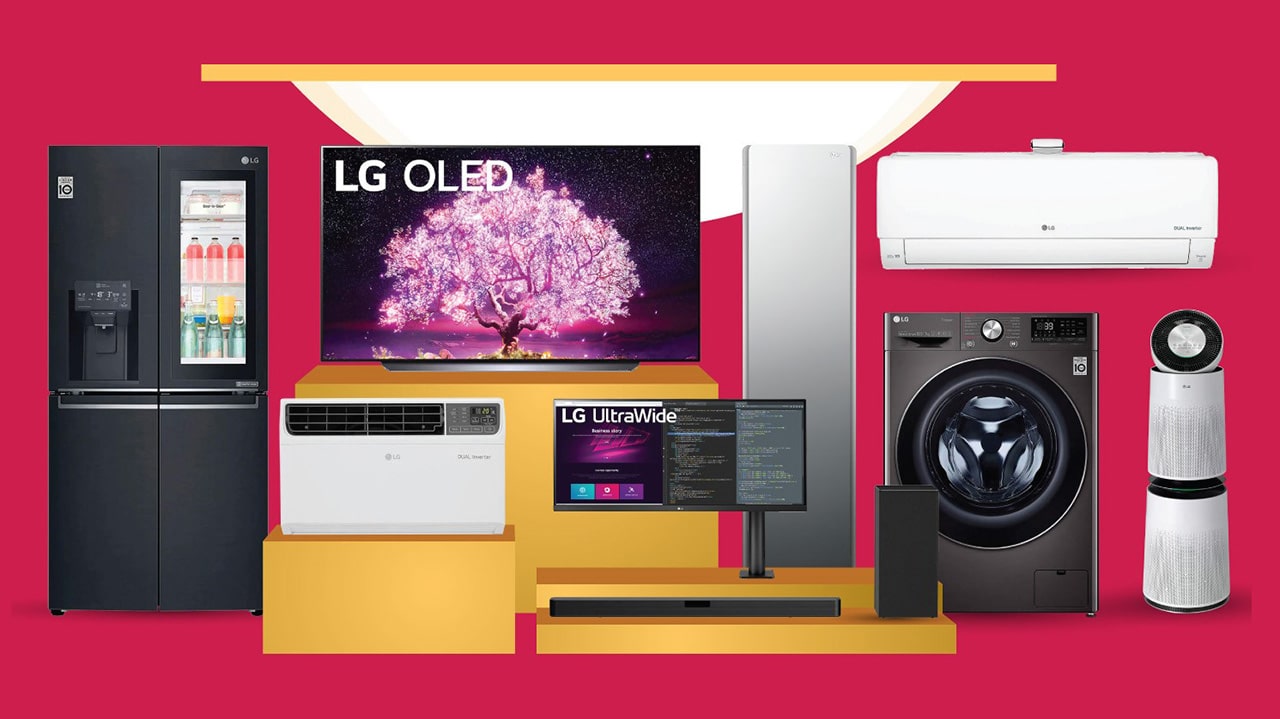 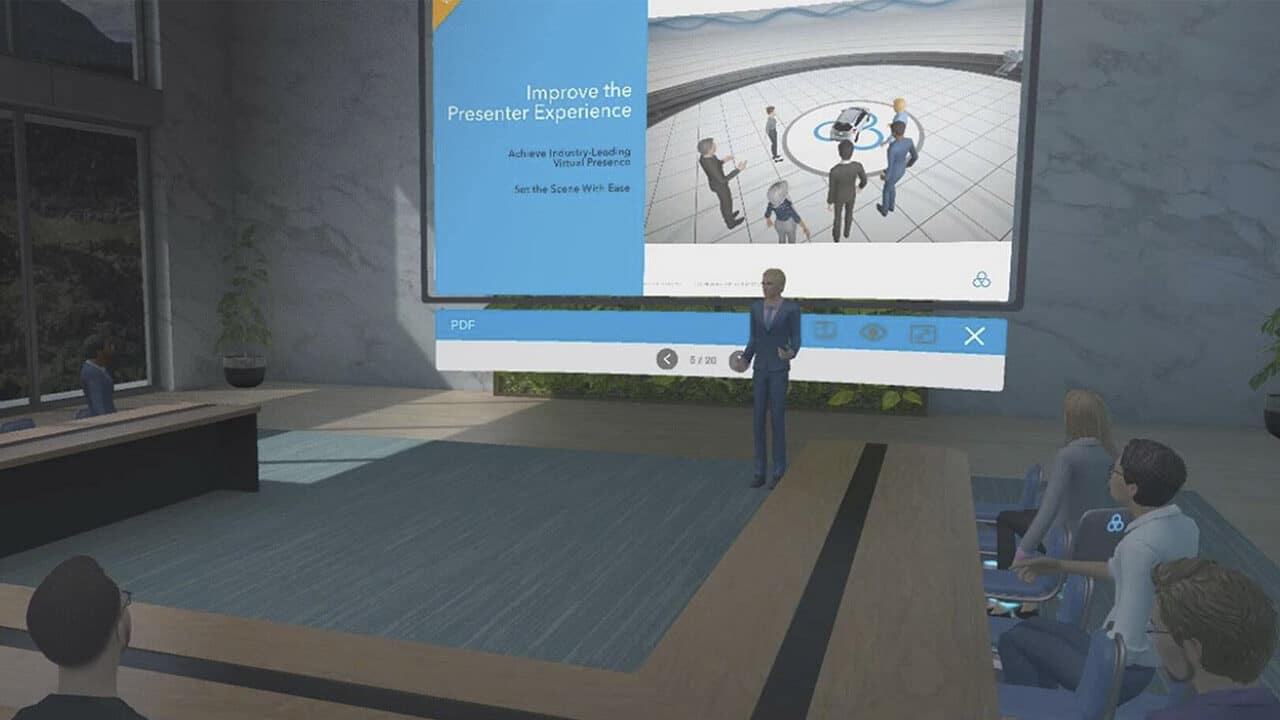 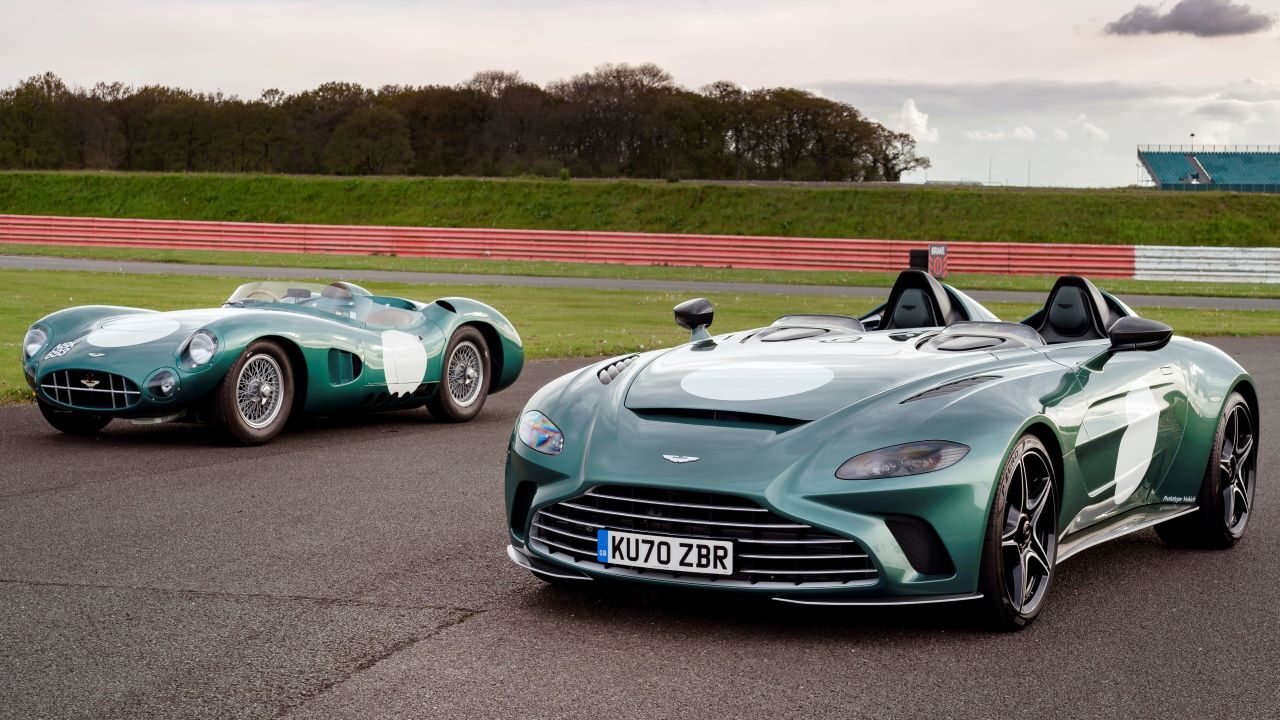 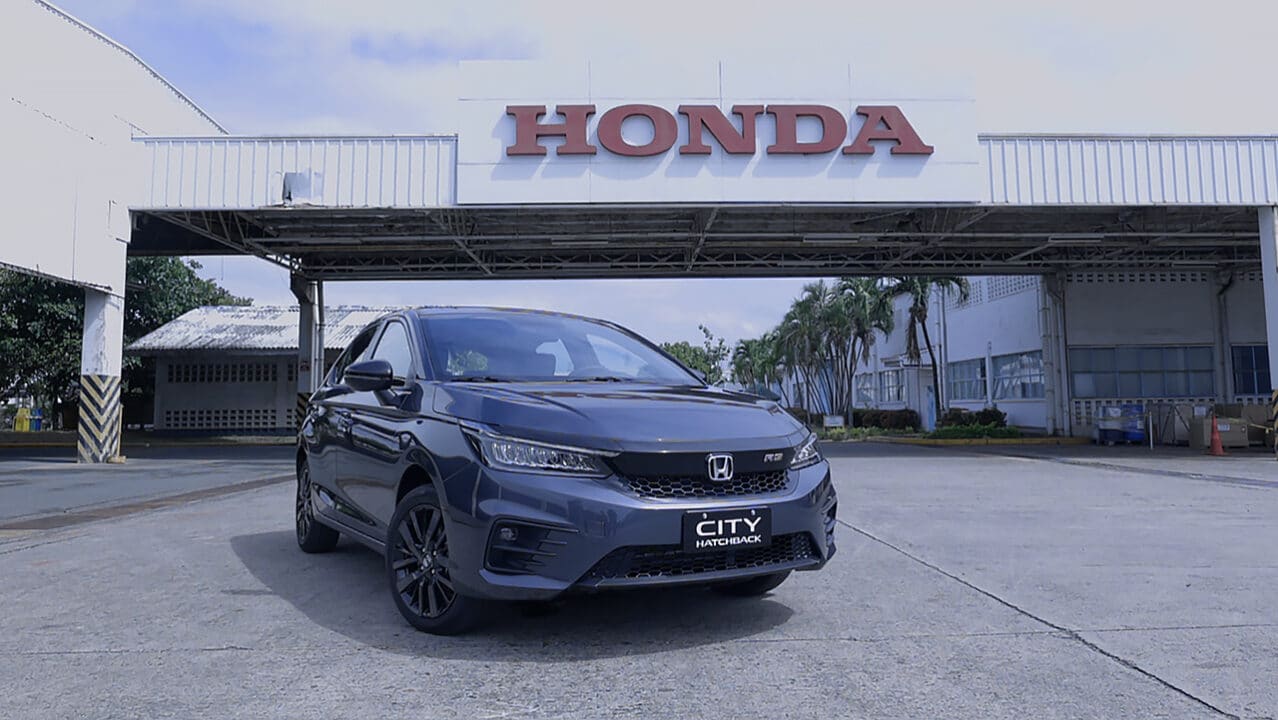